If she were born in a different place and time, I could easily see her being a stand-up comedian (a la Phyllis Diller or Lucille Ball). I have not seen or known anyone of that generation wield humor, wit and sarcasm as well as she did. I  am talking about my Ammamma  – my maternal grandmother. She passed away last year after a year of battling cancer.

She was married off  at 12, to a 45 year old widower (his 3rd marriage)!  I guess this wasn’t much of a shocker back in 1932!!
My mom was born when Ammamma was 15 years old. Ammamma was pregnant with her 3rd child when her husband (my grandfather) died tragically of a snake  bite in the rice fields. My uncle was born 10 days after the funeral!! She was only 19!
She raised  the kids with help from her  extended family. She made  education a priority for her kids, especially my mom – which was unusual in those days (especially in rural India). She herself was literate enough to read and write Telugu and could do farming-related math quite well. Eventually, she took over the reins of the family and the farming. I’m not sure if she was mild and demure when she was young, but she turned out to be a very strong woman out of sheer necessity – because of circumstances. She had a commanding voice and a hot temper and could be harsh when needed. I have seen her in action and have seen grown men cower when dealing with her ferocity!

We lived in the village with her when I was around 2-3 years old, as mom was working in Guntur and dad was posted in Andaman/Nicobar islands. Because of this time as well as regular visits during summer vacations – we had special bonding and memories, as well as endless stories and anecdotes  that she remembers and narrates in vivid detail.
After my uncle’s untimely passing, she and my aunt lived and managed the household. Together they managed to raise 3 wonderful kids (my cousins) – who are very successful in their lives. About two years ago she was diagnosed with terminal cancer. Except for the pain (which was managed), all her faculties were intact and her mind and wit were sharp till the end.

She was not too religious, nor was she an atheist. She did follow some gurus and babas occasionally – but not to the point of performing any bhajans or rituals etc. in other words she was no different than the average indian when it came to religion and belief. I remember that the veranda had framed pictures of : Meerabai with Krishna, Buddha, Gandhi and Jesus Christ.

Vidya and I were lucky to have spent time with her last july. She had lost a lot of weight and was on pain killers. Her eyes glowed when she first saw us, then she  became teary and emotional for a few minutes, then immediately changed mood as if a switch was turned off. She started inquiring about all the great-grand kids and our vacation (we had just come from vacation in Thailand).  She insisted that we have our lunch. My aunt served us lunch and mentioned that Ammamma directed her to make specific items that were my favorites from when we used to visit the village during summer holidays. “Chinta chiguru  pacchadi & pappu” and fish.  We were there with her for less than a day, but we reminisced about my childhood days and summer vacation trips to the villages. All her faculties were in great shape, especially her memory. She would refer to specific incidents and laugh heartily.


“Remember when you and Annayya (brother) stole  fish from the fisherman near the lake..” (We were probably 7 and  8 years old. She knows that fisherman. They had a laugh about it later and she would threaten to turn us in for the next few years!!)

“How about when you and Annayya walked  halfway to the next village without telling anyone, and we panicked and organized a search party” (we were probably 7 and  8 and decided to explore on our own I guess!)

“Remember how you had spilt the milk which you were supposed to deliver to the dairy center, then came home and lied that the delivery went well..” (Again, everybody in the village knew her very well. So, the loop was closed quickly and my deceit was revealed!)

“What about the time when you fell  into the dirty creek when the water buffalo knocked you over..” (This provided for endless jokes and she would mimic my tantrums perfectly. She was excellent at  imitating others voices and mannerisms).

Of course, I remember all of these and more, very vividly.

After dinner, she made my cousin dig up an antique, portable manual spinning wheel (to make thread from raw cotton) that was actually in working order. She made my cousin demonstrate the mechanism for us, all the while giving specific instructions to him on its operations.  That was her unique style..
When we left next morning, we all got quite emotional, knowing fully well that this is the last that we would be seeing each other.  I maintained a brave facade as much as possible.  My aunt stuffed a roll of several hundred rupees into Vidya’s palm!! This is a tradition I am very familiar with. Whenever we left the village after vacation, Ammamma or Attha would give us cash as a  gift for us to buy whatever we wanted (or turn it in to the parents – which is what we always did!)

As the car left the village, through moistened eyes, I could see the palm and coconut trees the village was famous for, the temple and the small library (which is now being used as a place for collective tutoring for the school kids). The lake behind the temple and library  (from where we had stolen the fish – at  7 years of age!) still had some lotus flowers (I remember we used to pick these during our vacations). For us, the village would just not be the same, without her.

After we got back to US, we kept getting updates on her condition, through my parents and also through Skype calls to my aunt and cousin. Her condition kept deteriorating and my aunt did yeoman service  to take care of her.
She was unable to eat anything and was given fluids (a few spoonfuls per day). My cousin from Pennsylvania left immediately  in order to be by her side.  Before he reached the village, one night , she was in such bad shape and unresponsive that they thought that she was gone. She was probably in a  coma for a day or two.  When my cousin got there, she was barely there, and was mumbling incoherently. She saw him through barely open eyes. He talked with her and mentioned the great-grand kids. Amazingly, within a day, she completely  turned around. After two days she was sitting up,  eating and conversing normally. Every one was amazed at this happy turn of events. In fact, my parents and aunt mentioned that she was even more energetic and talkative than before. She was inquiring about all the relatives, grand and great grand kids! For one so sick, she had an amazing amount of  energy. I guess this is what is known as “second wind”!

She told everyone that she saw some bright light and the “Yamadoothalu” (assistants to the Hindu God of death) taking her towards the door/light. Then she heard someone say that it was not her time and for her to go back!! People were awestruck. When my dad told me of this I could not believe my ears!!  A “Proof of Heaven/Near Death Experience/Out of Body Experience” in my own family!!   I had heard about these kind of experiences/stories, but was always skeptical about them, but now one of these in my own family.. wow.. unbelievable!!

I could not wait to talk to her. As soon as I could, I called up and talked first with my aunt and cousins. They said that she was in good spirits and gave the phone to her. She was ebullient and effervescent. She inquired about Uma and  my daughters and their studies. After 10 minutes of miscellaneous conversation, I could not contain myself – so I came right out and asked her.
“Ammamma,  I heard that you had mentioned about meeting Yamadoothalu and hearing a  voice that asked you to go back, since it was not your time yet. Can you tell me more?”
Here’s is what she said with a chuckle in her voice “I was just kidding” (“Oorikaylae .. Yegathaaliki”)!

My jaw dropped and stayed dropped for a what seemed like a long time!! The old lady just said the equivalent of “JK LOL”!!

A month later she passed away in her sleep. She was about 92 on September 22nd 2012 when she passed away!! (there were no birth certificates in 1920s rural India).  End of an era for our family as well as the village!!  Till the end,  she was quite a character! It turns out that she gave detailed funeral directions to a family friend in advance, including specific items to make for lunch!! 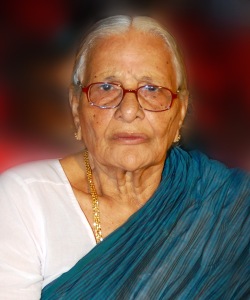 14 thoughts on “Our Very Own Proof of Heaven?”