“Watch out for the American girls! I heard they are out to trap smart and  good looking Indian boys!” – this was the ominous sounding warning from my mother when I came to the US in 1983. It seems she  got this piece of advise from her friend (so.. it must be true!). I chuckled and told her that  I was safe.

“Do you like Cheech and Chong movies?” the blond beauty asked, while lovingly running her fingers through my hair!

It’s only been 5 weeks since I came to the US. I was yet to lose the bad habit of staring at everyone. In this case, it is quite understandable – this was a very good looking young college girl standing next to me and saying something. It could have been her accent or the fact that I was not paying full attention to what she said, but I didn’t get it the first time!  I suddenly remembered the warning that my mom had given me before leaving for US. I just hoped that this girl would not be too picky about the “smart” and “good looking” attributes and just focused on my Indian-ness! And then .. this smiling and giggling girl repeated

“Do you like Cheech and Chong movies? They are hilarious!”, she said.

“hmm.. I do not know who or what Cheech and Chong are..” – I said, captioning the puzzled look on my face.

Then she went on to give a detailed description of who these guys were and the types of movies they made,  all the while giggling and playing with my hair. It took me a little while to figure out the connection between her “Cheech and Chong” references and her giggling. It seems these guys were two comedians who made marijuana/pot themed comedy movies in 1970’s and 1980s! Once this sank in.. I just froze  – even more than I was required to (considering that I was in a barber’s chair and she was armed with sharp scissors)!  It took me a while but even stupid ‘ol me could put 2 and 2 together! This chick was totally high as a kite!  Oh.. and I did not have to guess for too long .. for she came right out and told me that she just smoked a ‘joint’.

In the orientation session that I had at the university or even those informal orientation guidelines given by my roommates and friends, they had not prepared me for this situation. That is, how to react when your  hair stylist just announces that she was  high (on Pot/Marijuana/Weed)  while operating sharp tools inches away from your neck, eyes etc! What are you supposed to say or do?  Much later,  I did find out (thanks to “Harold and Kumar go to While Castle”)  that offering some snacks to them in such situations would be the right thing to do! Intuitively, I did know that I should not make any sudden movements – for the results could  range from hilarious to disastrous!

Most of the Indian  students at the University went to “Jackie Goran’s Academy of Hair Science” for haircuts as they were the cheapest ($5) and were right there on-campus. It turns out they were cheap because you get the hair cut by students learning to be hair dressers. This was my first visit to the “Academy” and turned out to be quite a memorable one!  The giggler came to her senses briefly, just as she announced that she was done. She asked me not to report her to her boss.  I gave a faint smile and nodded (that famous Indian bobble head  – which is a hybrid of a nod and a shake)!  Then her teacher/boss showed up and reviewed the work and gave a huge compliment on my hair –  “So thick .. nice & natural curls”. Then she gave specific and academic feedback to the student and then she was off to review the next haircut!  As I left .. the hairstylist-in-training giggled some more and said “Thanks for not ratting on me”!  I rushed back to the apartment and breathlessly described what just happened, to my bewildered roommates! When they were done having a good laugh, I asked  “what does ratting mean?”

Growing up in Hyderabad we had quite a contrasting tonsorial experience!  Till I was almost 15 years of age – we used to have the haircut at home! Chandraiah who was our barber – would show up on a Sunday once every month or so – without any appointment. Then my dad, brother and I would get standard haircuts one after the other. For some reason, it was decided that this needed to be done in the front yard. It was a beautiful and an unnecessarily public location for such a job. We were surrounded by a Pomegranate tree and several colorful and fragrant flowering plants – Hibiscus, Jasmine, Sampangi.  We would sit down on a “PeeTa” – which is a small wooden plank that is only 2 inches off the ground.  Chandraiah would squat behind and open up his leather case and go to work. 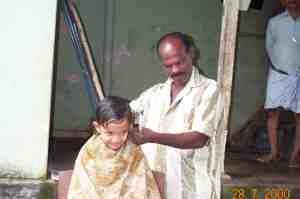 There were no questions about what and how much to cut or any instructions from us. He did it all very skillfully with just a comb and scissors. He did not ever touch the hair with his  hands. Most of the time I was totally embarrassed to be doing this in the front yard. We were always worried that our friends would see this spectacle while walking along the road! We were quite sure that everyone else was getting their hair cut at a fancy Salon (or Saloons as they were called in India). By the time we were in high school – we also started going to one of those saloons in Chintal Basti! I can still visualize the old guy nonchalantly cutting the hair .. taking a break once in a while  for bouts of cough and to drag a few puffs on the cigarette. These places were strictly for men and the barbers were always men. There wasn’t much of a small talk or any magazines to flip through while waiting. I am sure it’s quite different now. 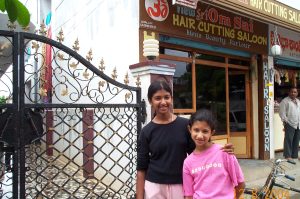 “Would you like a shampoo or just wet the hair down?”

“How much off?” — When I say an inch off – they actually do a imaginary measurement with their fingers before cutting!

“How do you want the sides? How about the back”

The place I go to now has computerized records (just like the doctor’s office has my medical records) – so no matter who gets to cut my hair  they already know my preferences (clippers or scissors? How much off? etc etc) – ‘cos they look it up based on my phone number. They probably also have a note in the system that asks them to compliment me on my ‘lovely natural curls’ – ‘cos they all do it and it automatically prompts me to add an extra dollar to the tip!

“My name is Jenny” , “So how was your weekend” , “Isn’t it a lovely day?” , “I cant wait to get out of here” — she rattled off even before I was seated and she got hold of the scissors! This was the first time she was cutting my hair.. but she was talking up a storm, with me chiming in once in a while!

I noticed that people are generally quite at ease discussing personal details freely with their barbers/sylists. I told her that my kids were off at school and she mentioned that she and her boy friend were thinking of getting another tattoo!!

These women (I had male stylists only 3 times in 31 years) could take the traditional role of the barkeeper or even a therapist –  who engages the patrons in idle banter  thereby drawing some interesting conversations and feelings out of them..

“I am the best man in my buddy’s wedding this evening” said one guy getting a buzz cut for the event!

“My boyfriend’s coming back tomorrow after 2 years”.. I thought he was coming back from the war in Iraq or Afghanistan. It turns out (based on further conversation) – that he was in prison for something to do with drugs and she was excitedly primping herself for his homecoming!

Kids getting their trim before school starts – the parents are usually right there giving specific instructions about where to cut and how much! “A close shave with the clippers  please, I don’t want to have to  come back in 2 weeks!”

Jenny paused from her monologue about tattoos in general and the specific one that they had picked, to announce that she’s done! Before I could stop her, she pulled out a mirror to show me the back of my head – bringing to clear view my bald spot!  I smiled and nodded my approval on the good job she did and told her “Extra tip for you next time – if you DO NOT show me my bald spot!” She had a hearty laugh.. and before she could recover, I pointed to the hair on the floor and said “Can you see if you can glue that back there to cover up the bald spot?”

As I walked out .. I told myself that I have to keep looking for the hair stylist that will take me seriously!