In most American Colonial style homes – there is a family room, a kitchen, a living room and a formal dining room on the ground floor and all the bedrooms are upstairs. The family room and kitchen are the ones that get used most downstairs.  Even in our house the living room and dining room are barely used. Our living room – ironically, is now a graveyard for all of our musical instruments. There is the upright piano which Ramya and Vidya had practiced on for several years, the alto saxophone – that Vidya had  played throughout middle school  and high school, an acoustic guitar (which Vidya planned to teach herself  from YouTube videos) and my favorite – a brand new tabla set! All these have not been touched in years – except the piano which Vidya does use once in a while  when she comes home from college for holidays. 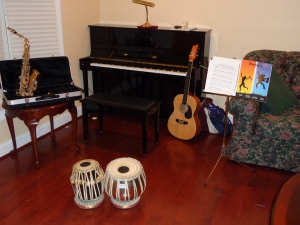 I was probably 10 – 11 years old when I first entered an Irani café in Hyderabad. These Irani cafés had lent a unique charm to the city. All Hyderabadis that I meet in the U.S. fondly remember their special Irani restaurant back home which they had frequented while growing up. They all had a lot of stories to tell about their favorite ones.  When I first walked into Zam Zam café that summer day, I was awestruck by the atmosphere and the hustle and bustle inside! The owner – who was a fair and well-fed Iranian guy looked down from his high chair behind the counter and said “Kya hona?” (“What do you want”). I just said “Chai” and handed the money and a kettle to him. He counted the money and barked an order – “Chotay!  Theen Chaai la re!”

While I waited for the chai to show up I took in the atmosphere. I could see ‘Chotay’ working pretty much all the tables… passing plate-fulls of mini samosas and salty “biskoots” and Pauna Chai.  At that time, I thought it was an odd nickname! Later on, when I was in college, I realized that “chotay” was a nickname of choice for any kid that works in these types of establishments. Finally, after what seemed like a long wait,  ‘Chotay’ brought back my kettle filled with chai. He looked like he was about the same age as I was. Yet,  there he was  – practically running the whole place! I was impressed and a bit jealous!  I carefully crossed the road back towards Public Gardens. Once inside the Public Gardens complex, I walked along the tree lined road which led to Jawahar Bal Bhavan. I stopped to pick up some ripened Kaala Jamun fruits that had dropped on the road from the massive trees! By the time I reached Bal Bhavan – my mouth and tongue were coated purple! It was almost a 15 min walk back (including the distractions along the way). Once in the building,  I made my way to the music room where my tabla teacher was eagerly waiting for his Chai. He grabbed the kettle and without so much as a “thank you” asked me to go back to my tabla set and continue practicing! Yes.., I was back to the boring two notes “Dha Dhin” that the teacher had taught me a week ago! All of the kids that at that tabla summer camp were told to practice just those two notes! Aaargh!  This was a large hall with several sets of tablas and sitars lined up along the walls. The campers were clearly split along gender lines. All the girls were playing sitars and boys were on tablas.  The paan chewing teacher was playing impressive tabla beats back and forth with his favorite older (teenager) students  – while the younger ones got bored with the “Dha Dhin” . This was equivalent to us practicing writing “A” and “B” over and over again, while the teacher and his favorites were showing off the equivalent of writing complex prose and poetry!!

Since my parents were both working and we had a long summer break, they had put all three of us into the popular summer camp at Bal Bhavan in the Public Gardens which was next to the State Assembly (and across from the All India Radio Station). We had the option to pick from a smorgasbord of activities. I picked  – photography, swimming, clay sculpture & tabla! We had learned a lot about composing photos (on our first ever camera – an Agfa Click-3) as well as developing, printing  and enlarging photos. We never actually picked up any swimming skills, but my sister and I did pick up a painful eye infection called Trachoma from the swimming pool, which required even more painful treatment which lasted 2 years!  I do remember that my brother had  learnt an important lesson that summer about the ill-effects on your knees of diving in a kiddie pool (2 feet deep)!

When I first saw the senior students play tabla – I was so impressed that I started dreaming  that I would be playing like that at the end of the summer session! After a couple of weeks of working on just the  two beats (“Dha Dhin”) – I totally lost all hope that I would ever get to play like those guys! Maybe the teacher was just testing to see if I was seriously interested – i.e. a sort of a tabla aptitude test, before teaching us the rest of the notes?  When I told my parents about my maiden visit to an Irani café – they were furious! While Irani cafes were fun hangout places for young men and adults, they did not think it was an appropriate place for a 11 year old to be visiting! Of course, they were also upset that the teacher was making little kids do personal chores for him! Bottom-line.. I was asked to drop that class right away! I did not protest too much, as I was getting quite bored with practicing “Dha Dhin” endlessly!

While the desire to learn tabla stayed latent, it was nevertheless very strong for a long time. Whenever, I saw artists like Zakir Hussain and Tanmoy Bose perform in concerts – that latent desire to learn and shine as a tabla player  kept  erupting.

Later… much later… I found a tabla teacher not far from where I lived in the Philly suburbs. I managed to find a kid in Silicon Valley who was selling his tabla set and bought it for $100. The teacher was excellent. He was patient with me and worked around my crazy work schedule and I did not have to fetch him chai! In fact, since the classes were held in his house, there were times when he offered me chai! Most of his other students were young kids  (6 – 18 year olds). At almost 40 years of age I was the oldest of his students. One day I had a chance to see his younger students play and my jaw dropped! Wow, simply wow!! When will I play like that? I was a big fan of fast food, instant noodles, instant soup etc. In that same theme… I wanted to be like Zakir Hussain – with minimal effort. I wanted “Tabla for Dummies” and “Complete Idiot’s Guide to Tabla” and  to go from “Yash to Zakir Hussain” in no time (and with no effort)!! Practicing for hours everyday was too much for me. At one point I felt like saying to the teacher “Can we just skip all these Taals and just show me what I have to do to play like “Zakir Hussain and his magic fingers?” I used to joke that if I ever got laid off, I could play tabla in the NY subways to make some money. 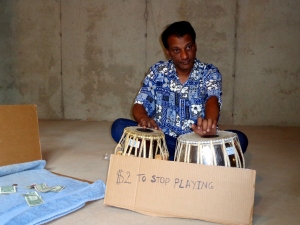 After about a year of classes and learning some basic Taals, I decided to buy a brand new tabla set on my next visit to Hyderabad. My dad and I visited the highly recommended shop for musical instruments – “Akbar Miya and Sons”, in the narrow streets of Afzal Gunj. There we sat down and bargained in the true Indian fashion. Dad told Akbar Miya to “give us the best one” and also “You should give us a good price – as he has come all the way from America!” I was almost certain that Akbar Miya just doubled the price in his head! Later when we came home with the set, I sat down and played some of my basic taals for my bemused family. They couldn’t believe that I was still so passionate about tabla after all these years! I then brought the two tabla pieces as my carry-on luggage all the way from Hyderabad to Bombay to Frankfurt to Philly –  convincing the customs and security officials along the way that there was nothing explosive hidden inside! Once back, I probably had 3 – 4 classes with  the new set. Then things got crazy at work for several months and sadly,  I just had to drop out of tabla lessons altogether. That was 15 years ago!

This isn’t over yet!

Every time I go to an Indian concert or see a 7 year old kid or even a non-Indian  play amazing tabla on YouTube, my desire to jumpstart the tabla classes is kindled!

It seems like everyone could effortlessly play like Zakir Hussain except me! It’s just not fair! What do I have to do? Put actual effort into this? Oh well! I hope to get back to tabla someday. That is why the tabla set is still in my living room – collecting dust (instead of getting sold off on eBay or Craigslist!!). Till then I will keep drumming my fingers on the dining table, on the steering wheel etc.. in the process, annoying my lovely family and my patient car pool friends!